The FBI, ATF, BIA and other government agencies have a long and checkered past of using subpoenas to federal grand juries to force activists to talk and give the names of others in social movements. This practice is not new to Indigenous people in the so-called United States, as is evidenced by grand juries surrounding Wounded Knee and the American Indian Movement. This is a classic fishing expedition based on political repression of ongoing defense of the Earth, Indigenous sovereignty and all that is sacred.

Grand juries have, both historically and currently, been used to target activists and those and engaged in political movements. The purpose of this grand jury and all grand juries that target activists is to cause division, manufacture prisoners of war, create paranoia and suspicion. Water Protectors will not be intimidated and resistance to this is only strengthening our resolve to defend what is sacred, the Earth and the Water.

Water protectors are standing in resistance to this grand jury and all tools of state repression, be it on the ground through Morton County’s violent tactics or in the shrouded secrecy of a grand jury courtroom. 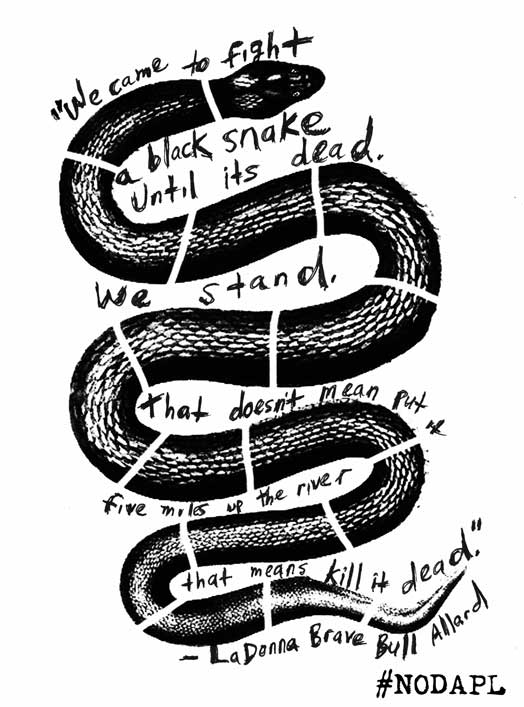 At 12:30pm on January 4th, Water Protectors will stand in solidarity with Steve Martinez as he resists this grand jury and the repression of the movement. People will rally outside the U.S. District Courthouse in Bismarck, North Dakota located at 220 E. Rosser Ave.

Steve’s statement of non-cooperation that he read prior to entering the courthouse and grand jury proceeding - January 4th, 2017 My name is Steve Martinez. I have been subpoenaed to this federal grand jury. I refuse to cooperate with these proceedings on the grounds of not helping opposition towards water protectors. I will in no way condone or cooperate with this attempt to repress the movement here at Standing Rock. I know that by refusing to cooperate I will most likely be incarcerated. The loss of my own freedom is a small price to pay for keeping my dignity and standing up for what is right- the defense of the earth and all that is sacred. Mni Wiconi!